On my train ride in to work today I saw a kid (probably between 16 - 20) who had the neck of his shirt (possibly a turtleneck) pulled up over his nose and mouth. He was holding it there by pinching the shirt to his nose. I figured at first that the guy next to him was smelly but the nose and mouth stayed covered after Possibly Smelly Guy got up. So then I figured he was fearful of germs. You know, swine flu and all that. When I got up to leave the train I saw that the part of his black shirt that he's been using as a germ filter was covered in shiny snot trails presumably from spending an hour pinching his nose with it.

As unpleasant a way that was to start my day, I have a feeling that kid's day got a lot worse when he showed up to school covered in nostril juice. 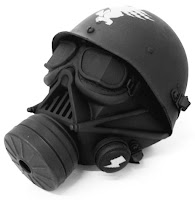