Yay! These Pictures Are Gre-...Oh.

At the beginning of May I participated in my first half marathon.  I think I blogged about it already so I won't rehash.

For some reason the company that was contracted to do race photography is based in Germany.  Normally this would be no big deal because I never, ever feel the need to order race pictures.  I have yet to take one where I don't look like I'm having some kind of episode.  In none of my pictures do I look like I'm having fun or even running, for that matter.  I swear I'm doing both.  One time I started running in an exaggerated fashion when I saw the photographer in the hopes that overemphasizing the movements they would show up on camera.  That experiment yielded a series pictures that make me look less like I'm running and more like I'm doing an impromptu roadside audition for Westside story.

So, no spending my money on race pictures for me.  Until now.  I decided that for my first half marathon I really needed to get a picture because it felt like kind of an accomplishment.  Luckily for me, there was a photographer at the finish line getting pictures of people holding their medals.  Perfect!  A race picture where I don't have to be running!  I ordered it and one other one that was only bad but nor outright horrible.

The race photographer's website was very, very slow.  After a million years of trying to look at pictures that would or would not expand from thumbnail I picked the two that I mentioned earlier.  Since the company is in Europe I got hit with an additional fee by my bank.  Thanks bank!  Then the waiting began.  It took about a month but they finally arrived this week.

Here's the one that I was so pleased to order: 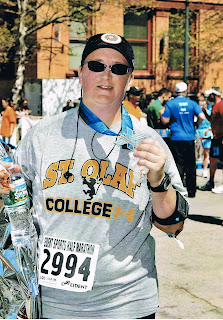 I was pretty happy with this one until I looked at it closely.  See it?  Allow me to zoom for you: 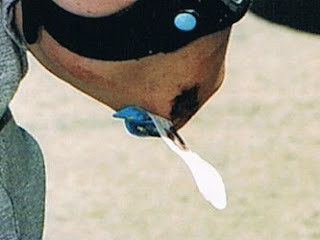 I can't decide whether this makes this picture more awesome or less awesome.  On the one hand, look how tough I am!  On the other hand, that is a Buzz Lightyear band-aid.
Posted by Unknown at 1:34 PM