I know, it's been a while.  I have a few things saved up to share with you, though, so buckle up!

A few weeks ago we had about a week of dreary, rainy weather.  On one of these days we'd had a respite from the rain and I drove downtown to stop in at my taekwondo school to find out why Master Oh had called me on my cell phone.  I parked in the municipal parking garage behind the school.  When I pulled in I noticed that someone seemed to have parked their wheelchair next to the low wall that separates the garage area from the alley.  The wheel chair was completely draped in a thin red blanket.  If this was to hide it, I'm not sure that red was an ideal color choice, by the way.  As I was straddling the low wall (what, like I'm going to walk all the way around?) near the shrouded chair I glanced over it and saw that there was something in it.  In all the times I have parked there and gone across this wall to get to the school I have never, ever made it over that quickly.  Seriously, if it was a pommel horse I would be sporting a medal right now.  Whatever or whoever (whomever?) was under there was not visible aside from tenting up the blanket in a few odd spot.  It seem to me that there was a smallish person under there taking a nap with their arm up over their head.  On my way back to the car I gave it a wider birth and kept me eyes locked on it the whole time.  No movement.  I sped home.  A hour or so later when Huppy called to say she was on her way home I a) told her about the freaky deaky wheelchair red (blood red!!!) blanket ghoul in the parking garage behind the school and b) made her promise to drive by and see if it was still there.  It was and she was equally creeped out.

I spent the next day thinking about what was obviously either a troll who lost his bridge and hides under this red (blood red!!!) blanket now waiting for unsuspecting people who get to close so he can snatch them and suck the marrow from their long bones OR a pile of dismembered body parts stacked on a wheelchair with a note for the police from a brilliant serial killer who wants to engage in a battle of wits.  That evening, I told Huppy that we were going to drive back there and see if it's still there.  AND IT WAS.  This time I took pictures: 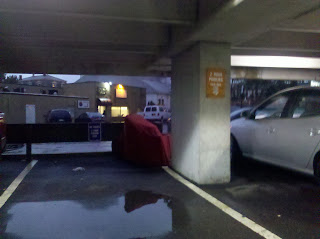 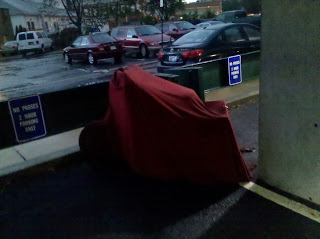 At the time that I took these it had been raining again all day.  As a result, a few things became clear: