We had houseguests last night.  Huppy's brother and his two kids (4.5 and 6 years of age) stayed over last night on their way to a fabulous vacation destination.  Since I'm teaching a summer class right now I had to get up at 5:30 to catch the train.  Since the kids are 4.5 and 6 they were already awake when I left at 6:10.  I went into the living room to say goodbye and to tell them to have fun and they were kind enough to tear themselves away from some kids show that involves a buch of obviously stoned guys in blue jumpsuts to give me a hug.  The younger one gave me a hug and said goodbye.  As he's heading back to the couch he adds, "Good luck."  You may think this sounds sweet but he said it in that exact tone that people use when they think you're going to need it and it;s not going to help.  You know, they way people say "Good luck with that."

So now I'm left wondering what he knows.  His name isn't that far off from Damien the creepy kid from The Omen movies and he does sometimes talk in a demonic-sounding voice (which sounded more pro wrestler to me before but now I;m not so sure).  So what started out as a normal carefree Friday has now turned into a danger-fraught gauntlet of doom.

Just in case Junior Spooky is correct, I want you all to know that it's been nice knowing you. 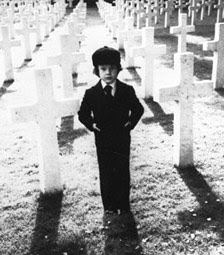