I was at Wal-Mart yesterday.  I feel that in the past I have been fairly critical of Wal-Mart for being such a miserable place to shop.  The lines were always 15 people deep, two-thrirds of the checkout lanes were inactive, the aisles were messy with nothing residing exactly where it was supposed to be, and it often smelled of humanity (liquid, solid, or gas depending on the day and aisle).  In the interest of fairness, I should say that my local Wal-Mart seems to have gone through an overhaul and the last few times I've been there it's been a much more efficient and less sketchy experience.  So, good job to you, North Attleboro Wal-mart.

As I left Wal-Mart and crossed the parking lot to my car I heard someone say "Excuse me!  Can you please help me?"  I looked around and saw a woman standing in front of a large pickup truck with its hood raised.  It seemed as though she was talking to me so I put my stuff in my car and walked over to her.  As I approached, I asked if her truck battery was dead.  She gave me an odd look and then told me that, no, her issue was that when she tried to remove the oil fill cap she came away with the entire oil fill tube instead.  After some discussion I concluded that when her son had last changed her oil, when he screwed the oil fill cap back onto the tube he misthreaded it and tightened it to the point where it was essentially frozen in place.  So, when she went to unscrew it to add some more oil the cap was so stuck that the twisting motion released the entire tube from the engine instead.  Fortunately, I had a flashlight app on my phone (yay technology!) and about 6 additional inches in height (yay genetics!) which allowed me to examine the area closely enough to figure out how the tube needed to be held in order to get it back onto the truck.  It didn't go on perfectly but it did go back on and it was tight enough to form a seal.  I told her I thought she'd be OK to get home but she should get someone to put everything to rights as soon as she could.  She thanked me several times and gave me a couple of handwipes as my hands were black with engine oil.  I told her it was no problem, wished her luck getting home, and left. 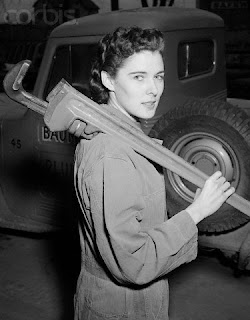 It wasn't until I was well away that it occurred to be that there is a good chance that the reason she asked me for help in the first place is that she thought I was a man.  I think that's why she gave me a funny look the first time I spoke to her to ask if her battery was dead.  I don't care one way or another about the mistaken gender identity there - it was getting dark and I have very short hair.  Actually, I guess I should be pleased that from a distance my middle aged lady hips weren't as obvious as I think they are.  What really pleased me, aside from the fact that I think I was actually able to help her, was that it never dawned on me that I wouldn't be a perfectly reasonable person to ask for help.  It was nice to know that I didn't automatically assume that some kind of testosterone-give knowledge was required.

This is a good thing since my efforts at playing the helpless female usually end in disappointment anyway.  A few years ago, a stray cat decided that my garage would be an excellent place to shuffle off its mortal coil.  Unfortunately, thanks to warm weather and a several day stretch in which I didn't need anything from the garage the cat's mortal coil had become quite a haven for disco rice.  Rather than deal with this, I went next door and told my neighbor Jeb about it.  I was hoping that if I seemed traumatized enough he would manfully go into my garage and take care of it.  Instead he got all queasy looking and suggested calling the city animal control office.  This turned out to be excellent advice because about a half an hour later a woman from Animal Control showed up and womanfully took care of it.  My heroine!
Posted by Unknown at 4:09 PM