Is This the Real Life? Is This Just fantasy?

So, dear readers, I've been living in Boise for about two months.  I'm here to tell you about my experiences thus far.  First, it's really beautiful.  That goes without saying. 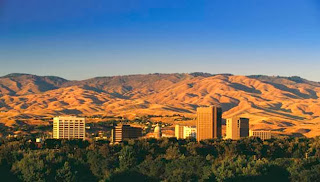 I realize these are primarily customer service stories but a) they still count and b) I just got here so my social stories are fewer in number.

Other stray items not related to niceness:

Enough for now.  All is well here.  My new job is keeping me hopping and eventually I'll be done unpacking all this STUFF that at some point in my life I thought I needed.
Posted by Unknown at 11:49 PM