A couple of months ago, a house down the street from me was put up for sale and subsequently sold.  It's far enough away that I have no idea who lived there before nor would I have any reason to know who lives there now except I have now become obsessed everything related to this home.  Here's the story:

About a month or so ago, as I drove by this house I saw from the corner of my eye that something was different about the front yard.  Specifically, it seemed that someone was building a fence.  This house is a standard raised ranch.  There is absolutely nothing unusual about it.  The first segment of fence was made from two medium-brown 4x4's as posts and some similarly colored 1x5's (1x4's maybe) connecting them horizontally across the top and bottom.   Attached to these horizontal pieces appeared to be pieces of bamboo and the whole fence was about 4 feet tall.  Can you picture it?  I think the reason I noticed it was that the fence looks like it would be quite nice in front of a nice Zen rock garden or maybe a small temple.  In front of a cookie cutter raised range, it's a bit odd.  But, hey, whatever flips your wig, right?

Why am I telling you in tedious detail about this fence?  Partially because it gives me cognitive dissonance every time I look at it but also because the construction of this fence has turned into some kind of epic journey.  This fence, when finished, will probably be about 30 feet long which is not very long in the world of fences.  The homeowners work on this fence all the time and it's still not done.  I drive by and cheer when I see another section has been added.  On several occasions, though, the next time I drive by that section has been dismantled and someone is standing over a pile of bamboo with their hands on their hips.  (Side note:  I now understand that the combination of eastern and western design is a reflection of the couple themselves).

This has been going on for about 6 weeks.  Each weekend and some week days these people are out in their yard building the fence in a two steps forward/one step back fashion.  I'm now heavily invested in their success.  Building a fence (or anything, if I had to guess) is clearly way, way outside their comfort zone but they're out there suffering the slings and arrows of outrageous carpentry like troopers.

I want to sneak down there in the night and just finish it for them like a giant shoemaker's elf.  I honestly believe I could do it in maybe an hour or two.  Another part of my obsession with this fence is my inability to imagine what could possibly be so difficult.  The bamboo pieces?  None of them are the same length.  Should I leave one of my extra tape measures on their doorstep?  Everyone knows about those, right?

Today's episode involved the addition of another vertical post so it looks like there's at least one more fence segment coming.  When I drove by this evening I saw that the post is in the ground, the hole filled back in, and it looks nice and vertical.  Huzzah, two more steps forward!

Aaaaand it's about 6 inches taller than the rest of the fence posts.  One step back.

I'm moving in 17 days...I fear this is going to be a cliffhanger. 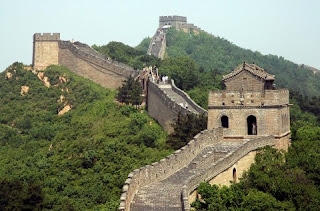