A Case of Cerebral Flatulence

There is a water filter in my basement that filters the water for the whole house.  Once in a blue moon it needs to be changed.  It's not a very difficult thing to do.  This is the story about how two reasonably intelligent people managed to turn it into a circus.

To begin, it was Huppy who decided it was time to change the filter.  I was in another room and I could hear her steadily growing frustration level.  It seems there's a knob at the top of the filter that allows you to bypass it.  This is helpful when taking the filter out so that the only water that comes out is that just sitting inside the filter itself.  This knob was not submitting to her efforts to turn it to bypass so she turned the water off at the knobs on the water pipes above it instead.  This is where I wandered in to see if a fresh set of hands (or, to be honest, a bit of cheerful optimism) could make some headway.  As she unscrewed the filter, water started spraying out a little.  This wasn't necessarily worrisome as we knew that there would be some water already in the pipes.  Well, I decided (this was my decision and my decision alone, world) that the thing to do would be to just go ahead and unscrew the filter all the way.  My theory was that, like a bottle of soda, once the pressure was relieved the water in there would fall into the bucket underneath the filter and we could proceed.  This is not even close to what happened.  Instead, the water started spraying out in all directions more agressively and then when I made that final turn it blew the filter housing off and a gush of arctic water came pouring out with absolutely no intention of stopping.  Obviously I tried to put the filter back on immediately.  This proved to be a challenge due to the sheer force of the water I was pushing against and the fact that it was so cold my hands were already numb and there were shooting pains going up my arms.  Did I mention this frigid water was going everywhere?  At this point in my story there was a lot of shouting happening.  I distinctly remember actually saying the words, "Oh my God, what have I done?".  Prior to this event I would have classified that statement as something that is only said in books or movies and not by actual people.  I won't keep you in suspense, I did finally manage to get the damned thing back on but not until the water had soaked everything within 5 feet of the filter (including me) and a little o-ring type seal had been carried off in the deluge.  The absence of the seal meant that once the filter housing was tightened again there was still a fine mist spraying out.  It was a vast improvement, though, so we took a moment to regroup.  Oh, hey!  There's the shutoff valve!  I turned it, the fine mist turned into a fine trickle, and all was right with the world.  Except, of course, the shitload of water dripping off of everything. 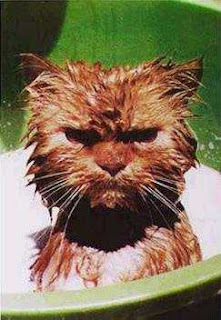 Lest you think we are completely inept let me add a few notes.

1.  The utility closet has no light in it so all activities are done by the light of a flashlight.
2.  The big, monster flashlight is not where it is supposed to be so we had to resort to the small crappy one that only allows you to see about 6 square inches at a time.
3.  The shutoff valves that were originally turned off were at eye level are bringht red.
4.  The shutoff valve that actually worked was gross, dusty, rusty, and located at ankle level.
5.  I should not try to help.

On the upside, Huppy's mood improved dramatically when the situation went from "Big strong Huppy is too weak to turn the damned knob" to "Maia made a huge mess (again)".  All is as it should be.
Posted by Unknown at 6:01 PM